Fifteen years ago, on September 3, 2001, inside Fraunhofer Fokus Research Institute, first commit to the source code repository of Kamailio has been made by Andrei Pelinescu-Onciul:

Here are the references to the first three commits:

The project was initially named SIP Express Router (aka SER), years later – after a fork, a rename and a merge – it converged into into what is now the Kamailio project. It has been a fabulous journey so far, in a more than ever challenging market of real time communications.

Well known for its performances, flexibility and stability, Kamailio has set a relevant footprint in open source and open communications, enabling entities world wide to prototype, launch new services and build scalable businesses, research and innovate in real time communications. More over, the project has succeeded to create an amazing community of users and contributors, the real engine behind its successful evolution. 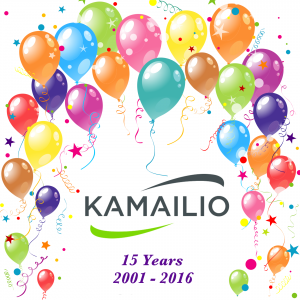 Its time to celebrate the moment, everyone involved deserving it — thank you all!

In a few months the project will deliver v5.0.0, its 16th public major release, with a restructuring of the source tree to match current modern approaches and more flexibility in choosing the language for building the desired SIP routing rules. Stay tuned!