Disclaimer: this page contains statements about some events in the pasts. The statements were valid at the moment when the specific event happened and the situations may have changed afterwards. If you feel that there is inaccurate information, please contact one of the board members of Kamailio (OpenSER) project.

Main goal was to join the efforts of the two development teams to build a solid and flexible open source SIP server that ensures trust for the future. On January 11, 2010, Kamailio (OpenSER) v3.0.0 was released, representing first version built from full integration of source trees from Kamailio (OpenSER) and SIP Express Router (SER) projects, offering all features of the two SIP servers, along with new developments and a SIP expertise started in 2001.

On July 28, 2008 – OpenSER was renamed to Kamailio due to trademark issues.

The old domain openser.org is no longer available for the project. The person that registered openser.org back in 2005 created a fork named opensips shortly after OpenSER to Kamailio renaming and few days later redirected openser.org to his new project.

Mailing lists, archives, dokuwiki, downloads, documentation repositories and the rest of resources you were used to within the website and project are available under kamailio.org domain — all versions since June 14, 2005 – you need just to replace openser.org with kamailio.org.

OpenSER versions from 0.9.4 to 1.3.x will still be maintained and hosted under the new domain kamailio.org. The name for old releases will continue to be OpenSER.

Kamailio® was registered as a trademark in the European Union and USA to prevent issues like this in the future. The Management is now ensured by an interim group working to create a foundation that will take care of project administration to avoid in the future situations as above. See more…

Click here to read the original annoucnement of the rename

A timeline based history of SIP Router project is available at http://sip-router.org/history/.

Between 2005 and 2008, Kamailio (OpenSER) had standalone source code repository and its evolution was independent of SIP Express Router (SER), summarized in the next paragraphs.

OpenSER project started on the 14th June, 2005. It looks as an young project, but actually it is full of history.

Origin of OpenSER goes back in 2001-2002, at FhG FOKUS research institute in Berlin, Germany. In autumn 2002, the SIP Express Router (SER) project was released open source under GPL license and the source tree moved to BerliOS open source mediator site. During 2005 the evolution of the public project developed in new directions.

The fork allowed for development of the new open source project to start quickly (a roadmap was put in place, a management board has been formed, a policy about contributions has been defined, the new release cycles have been established).

On November 04, 2008 – Kamailio (OpenSER) and SIP Express Router (SER) teamed up to integrate back their source trees, known as the SIP Router Project. 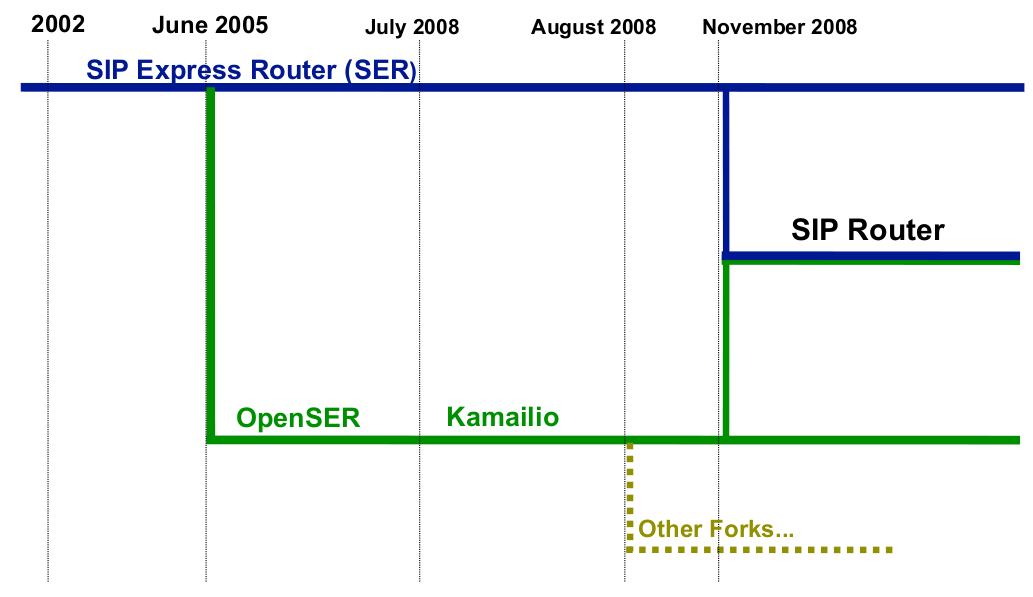 On December 20, 2012 the Kamailio – SER integration process is completed, the project will continue to use the name Kamailio.

Other relevant past events