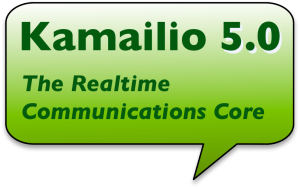 Kamailio SIP Server v5.0.1 stable is out – a minor release including fixes in code and documentation since v5.0.0. The configuration file and database schema compatibility is preserved, which means you don’t have to change anything to update.

Kamailio v5.0.1 is based on the latest version of GIT branch 5.0. We recommend those running previous 5.0.x or older versions to upgrade. There is no change that has to be done to configuration file or database structure comparing with the previous release of the v5.0 branch.

Source tarballs are available at:

Relevant notes, binaries and packages will be uploaded at:

What is new in 5.0.x release series is summarized in the announcement of v5.0.0:

We hope to meet many of you at the 5th edition of Kamailio World Conference, the project’s annual event, scheduled for May 8-10, 2017, in Berlin, Germany!